One of the largest growing medical fields today is the study of the human mind. Modern medical technology has allowed us to observe and learn more about the mind than we’ve ever been able to before. This also increases our ability to study potential methods of protecting and even improving brain function, mental capacity and memory. Both turmeric and ginger have long been used to support brain health, and new research shows even more potential benefits of these potent spices. Turmeric ginger tea offers a stimulating way to enjoy the best of both, and protect the health and function of your brain.

How Aging Affects the Brain

While there can be a number of things that can affect mental function, including trauma, stress and fatigue, one long-term issue that is shared by a majority of people during their lifetime is the effect of aging on the brain. Like most parts of the body, as aging sets in, changes begin to affect functionality and efficiency in the mind, especially in memory and focus. Although much is still unproven about why memory and thought processes are so affected by aging, one of the prevailing theories is that aging leads to a decrease in the release of acetylcholine, a neurotransmitter that plays an essential role in the communication process between neurons. Another factor is shrinkage of the hippocampus, which, starting after you turn 40, loses 5% of its overall mass every decade (individuals diagnosed with memory diseases such as dementia and Alzheimer’s show even greater shrinkage). This leads to a significant decrease in memory storage and access as aging continues.

While the effects of aging on mental faculties are experienced by nearly everyone, its severity can vary greatly between individuals depending not only on genetics and other health conditions, but lifestyle factors such as eating and exercise habits, smoking and alcohol intake, even some prescribed medications.

Several of the natural properties found in turmeric ginger tea may help to combat the natural effects of aging. This tea not only provides a number of antioxidants, but also stimulates the formation of bilirubin, an important antioxidant in the brain. This is highly important as it helps to neutralize free radicals in the brain before they can cause oxidative stress, which the brain is highly sensitive to. Turmeric ginger tea has also demonstrated neuroprotective properties against other damaging elements, as well as slowing the rate of cell deterioration. Because of the ability of curcumin, turmeric’s main constituent, to cross the blood brain barrier, turmeric ginger tea is able to impart benefits other herbs may be unable to offer.

More than its positive impact on delaying the aging process in the brain, turmeric ginger tea has multiple properties that can help to improve mental function. This tea’s positive effects on circulation are especially helpful, as they increase blood flow to the brain, providing more of the oxygen, nutrients and energy that the brain needs to function. It has also been shown to improve concentration and short-term memory. 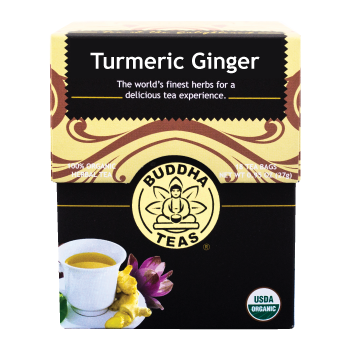